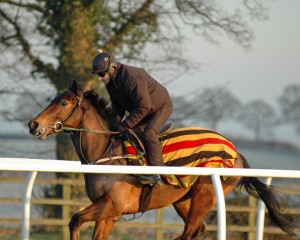 Where are you based & what is your day job?

I am based in Lanarkshire in Scotland and I am a director of a chemical manufacturing and contract cleaning company. I also co-own a hotel based in Callander in the Trossachs National Park.

How did you become involved in WRS?

I became involved with WRS through a friend who had contacted Andy Bonarius. He was keen to buy a share in a horse and knew that it was something I’d been looking to do for some time. It was via Twitter that he discovered WRS

Which horse(s) do you co-own?

Henry Bee was my fist involvement and then Woolfall Sovereign

Why did you choose this horse(s) to be involved with?

Henry Bee was being touted by Andy at the time when I was looking to become involved and I liked the look of his profile and breeding. I thought it was good value for money for the share on offer so I decided to take the plunge into racehorse ownership.

Do you secretly have a favourite out of the two?

Henry Bee will always be my favourite, mainly because he was the first horse that I’ve ever been involved in. Also he has given me a rollercoaster ride since his first run at Wolverhampton in January 2012 to his first win at Beverley in July. I’ve experienced every emotion with him and loved it all.

How long have you been part of Team WRS?

I joined WRS in early October 2011

What is the best thing about owning racehorses?

Watching your own horse run is an amazing feeling, but to see him win just can’t be beaten.

What are you looking forward to the most this coming flat season?

Seeing both my horses running and hopefully improving as the season develops. I love nothing better than going to the course to see them in the flesh.

That’s a very hard one for me to answer. It was always the jumps, but now that I’m an owner of 2 flat horses I can’t actually say that anymore. I suppose I now lean more towards the flat!

How often do you go to visit your horse(s) at the yard?

Unfortunately not anywhere near as much as I’d like and that is purely down to the logistics. I’m based up in Scotland and my 2 horses are in Yorkshire and Newmarket respectively. It’s a full day for me to take out of my work to go to see either one of them.

Has being part of team WRS lived up to your expectations?

Without sounding sycophantic, it has been far greater than I ever hoped or imagined it would be. To be involved with 2 horse that have both experienced the joy of winning on more than one occasion each is truly remarkable. There are many owners who never experience winning once – I’ve had it multiple times and loved every one. My favourite however is still Henry’s first win. It will always have a special place in my heart.

Apart from your own horses, which other racehorse would you love to own & why?

Of the horses in training just now I would dearly love to own Overturn as it is a consistently high performer on both the flat and over hurdles. He’s a game performer and never runs a bad race. On his day he could beat all comers. I couldn’t possibly pick 1 horse from the history books as there are far too many that have been favourites of mine.